Yep. It's the bobblehead thing. Again.

What is with this team? I know, I know... It's a bobblehead, it isn't supposed to look exactly like the player. But shouldn't it at least look a little like the player?

As you will recall, I have previously delved into the subject of Canes bobbleheads. And I've discovered that lately, they appear to be modeled after various political figures. The most glaring example was that of Cam Ward's bobblehead: 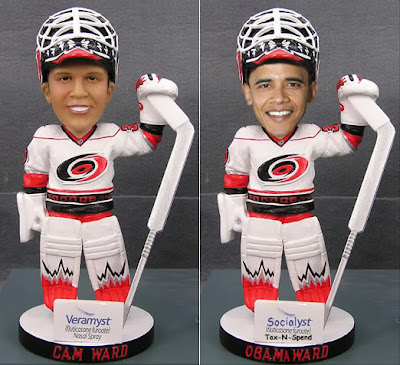 Well, as you can see, the Cam Ward bobblehead was clearly modeled after Barack Obama. There's just no denying it. But what the hell? Given Obama's popularity back then, I guess it helped marketing. But I wonder if there was not some backlash over this.

Let's face it: The South is generally a conservative area. And the Canes are located well below the Mason-Dixon line. So maybe modeling Hurricane bobbleheads after a black socialist wasn't such a hot idea after all. I know that sounds a bit harsh, but I am a conspiratorial kinda guy. So I am thinking that maybe the Ocama bobblehead might've drawn Gale Force Holdings some complaints. I suggest this, because what other explanation could there be for their latest foray into bobblehead-dom?

In case you haven't seen it, the Canes have now released their first soon-to-be-found-on-EBay chotchke of the year. It is an Eric Cole bobblehead. Of course, one has to wonder about the irony/symbolism of making a bobblehead of a guy that broke his neck a coupla years ago, but I digress...

The point of this diatribe/conspiracy theory is that apparently, the Canes have decided that they needed to be "Fair and Balanced". Maybe practice a little bobblehead fairness doctrine. Because they sure went the other way with the Cole chotchke. Yep, you guessed it. The Cole chotchke is the spitting image of George W. Bush: 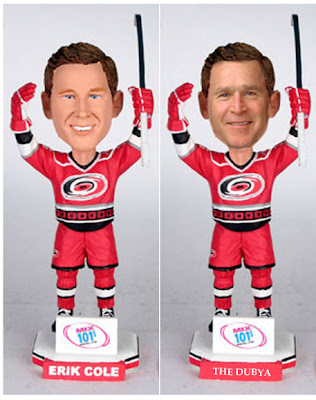 Seriously. Maybe you think I am nuts, but this CAN NOT be a coincidence. Two bobbleheads - Two presidents. Think about it.

Of course, there are other possibilities. Given how bad this season is going for the Canes, maybe they had other subliminal messages in mind: