CasonBlog is still a daily hit - and Scotty just revamped his format with a shiny new look. CB was one of the original Canes bloggers and he just celebrated 2 years of the gig. Hat tip to him for always having the backs of newbies and showing support. I'm especially digging his new feature: "CB Spotlight".

Bubba of CanesCountry is the newest Southeast Shootout contributor and continues to always come through with a thoughtful and informative daily post. He houses a great forum and message board through his site that is not overwhelmed with members. It's kind of nice having an intimate group to share your disapointments, rants or raves with as opposed to having hundreds of people such as with the more mainstream forums.

Her Majesty, AQ, was recently mentioned in the whole "Eklund Takedown" as the anonymous hockey "blogger" was after her in more ways than one. You don't mess with her. She can out-wit anyone.

Storm Surge has burst onto the scene this week with a South Park influenced banner. He digs Hurricanes and Beer. I like him already.

D-Lee of Redandblackhockey has been come-and-go with his posts this offseason - but he can always be counted on for breaking the glass with the latest scoop. He was the first to post about the leaked "new uniforms". I expect he'll be back with more frequency when the season gets rolling.

I have nominated the following two for Hockey Ladies of Greatness:

Magnolia Mer of Paperwhitesinseason always brings the funny with her daily frustrations or music raves from her wide array of taste.

Beth Ellison of Beth & Hockey is putting together a team for the Pete Friesen Leukemia/Lymphoma 5k run that the team is sponsoring. What a great idea! Herr Wuff is all about philanthropy. 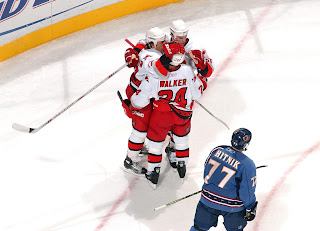