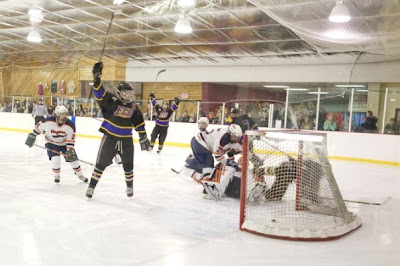 From the ECU Hockey homepage:

ECU Wins Back to Back Wins - Dominates 2 Virginia Teams

The team in conjunction with Zeta Tau Alpha raised several hundred dollars for breast cancer research as a part of the teams continued commitment to community involvement.

Saturday afternoon, the Pirates played Old Dominion University. Still wearing pink ribbons as they will for the month of October, the Pirates started the first period slowly, spending an abnormal amount of time in the penalty box. The end of the first period had the Pirates down 1-2. However, during the second period, the Pirates minimized penalties, scored 6 unanswered goals and assumed the lead. ECU never looked back and controlled the game until the end with an 8-5 win."

The Pirate hockey team at least provided some good spirits to counter-balance the suddenly flailing ECU football team as they lost to UVA 35-20 on Saturday.

Labels: College Hockey, East Carolina, Opening Up A Can, Philanthropy, Virginia Is For Lovers