What follows is the first of what I hope to see several more of here, a team interview with the college teams. Other squads have any interweb access and want their own post here? Send some hellos to CarolinaOnIce@gmail.com.

Things should be pretty clear for the BRHC's coming season after the Annual Fall Meeting this coming weekend in Williamsburg, VA. Earlier this summer the Colonial Collegiate Hockey League ponied up with the Blue Ridge Hockey Conference. Essentially, the new BRHC is this frickin' big: 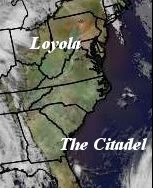 and stretches nearly the entire Southeast which should be a good thing for members of NC and SC's teams (East Carolina who is back after an independent season, ASU, The Citadel, UNC-W, UNC-Charlotte and NCSU's Division III team) as they play in broader areas and more rinks with the chance to bring in futher alumni support. They're gonna need the gas money, folks.

And because every single college kid has a Facebook account apparently, be sure to join the Blue Ridge Hockey Conference Group to keep up to date around the league this coming year.

Here's a few questions with the very clean-shaven men from the Citadel team: 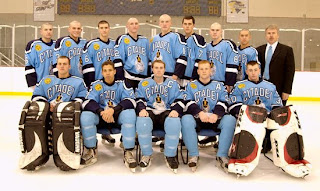 COI: Your biggest game of the season this year will be...

It depends on how the season goes. Most likely it will be a playoff game.

COI: Optimism = good. What does the future hold for Bulldogs hockey?

We have high hopes for the team. Our coach is dedicated to bringing in good quality players, and ensuring that the Citadel becomes one of the best teams in the South. The team has been around since 2001, and I expect it to be around for a lot longer.

I went to the Citadel to become a better person and a better leader/team player. I started playing hockey when I was 10 and wanted to play rather than watching hockey games.

COI: Has the team ever done anything with the fellow Charleston team the SC Stingrays of the ECHL?

COI: You should try contacting the team management at their home page. 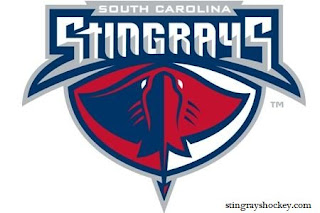 COI: What have been the highest and lowest points in your career as a Bulldog?

Highest: Going to the Naval Academy with 8 players and still gaining a lot of respect. Lowest: Losing 6 games in a row.

COI: Very cool and ouch. What do you think the future holds for Bulldogs hockey?

An ever expanding team and schedule...and the Citadel's greatest all-star of all time (me) pretty much dominating Grimes in life.

I ended up going to the Citadel because I was looking for a military school and it came down to Norwich and the Citadel. The Citadel was 15 minutes from the beach in the city while Norwich was in the middle of the woods with nothing around it. It was an easy choice. I started playing hockey when I was about 3 years old at public skating. My dad would bribe me with pizza to skate from one end of the ice to the other.

COI: Mmmm. Pizzzaaaa (stops to wipe drool for a sec). So VMI is the chief rivalry with both schools being military colleges?

We played them last year and it was a rough couple of games. It was really cool though because even though we both were at each others throats on the ice, after the game we were all pretty chill.

COI: How active are the coaches, staff and current players in recruiting?

Our coach has been awesome in terms of recruiting. We have two things against us, we are playing a northern sport in a southern state and also we are a military school so there are only a certain number of people who would even consider coming here. Our coach has been able to overcome these obstacles and still be able to draw in players.

COI: The team website is quite sharp and is regularly updated. What else do you do / what are you doing for promotion? How do Charleston area residents and Citadel students find out about the games?

We use such things as Facebook and word of mouth.

COI: We're a bit late to the whole Facebook party. A little off-topic here but still of interest…can you explain the Citadel tradition of weddings? (I had an old friend tell me something about the exit of the bride and groom under the crossed swords and the smacking of her behind by the best man with his blade...)

It’s about welcoming her to the Citadel family.

COI: Okay then! Good luck to the Bulldogs on the coming season.