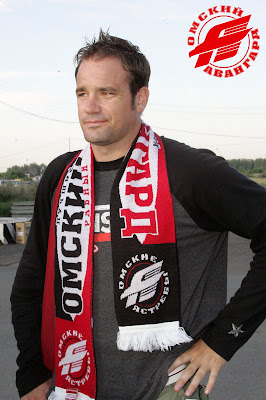 Johnny Grahame didn't get off to a great start with his new Russian club, falling 4-2. Oh well Crackers, at least you didn't get a penalty for "attack an opponent not holding the hockey". Jaromir Jagr was even on the +/- column. No word on whether or not he's still Mr. Personality in the post-game interviews.

Irony at it's finest: Babchuk leaves Avangard Omsk to join the Hurricanes near the same day in July where John Grahame leaves the 'Canes to join the Hawks in the KHL. Здравствуйте (which apparently is "Hello" in Russian) and goooooodbye Grahame.

Labels: Anton Babchuk, Dont let the door hit ya where the good lord split ya, From Russia With Love, Jagr is a girl, John Grahame, Seriously Jagr is a girl