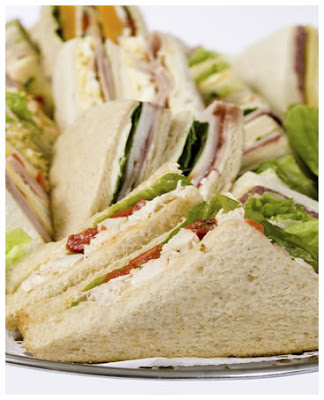 Just when you thought it couldn't get any weirder in Caneland, Wuf forwards me this link:

http://hurricanes.nhl.com/team/app/?service=page&page=NewsPage&articleid=402940
Apparently, the Hurricanes are now designing sandwiches for Harris Teeter. I shit you not. The first edition is apparently the "Walker 24". Honest to god, they are promoting a sandwich 'designed' by Scott Walker. The press report is silent as to the actual ingredients that make up the "Walker 24", but an inside source has informed me that the main ingredient is Genoa Salami. According the the tightly guarded Scott Walker recipe (which we here at C.O.I. have obtained), the secret to making the "Walker 24" is that you beat the holy hell out of the Salami, and slam it to the ground. You must then wait 5 minutes before you can put it on the bread.

Now you 3 faithful readers know how we roll (no pun intended) here at C.O.I. This story got me and the Wuf thinking. We just knew there had to be other entrants into the sandwich making promo. Specifically, there had to be some rejected sandwich ideas. So I did some digging. And lo and behold, through some super-secret inside informants, I managed to get the scoop. I can't reveal my anonymous sources, but it turns out, there were a couple of not-so-great sandwich submissions from the lockerroom. So here, in another C.O.I. exclusive, we would like to share a couple of the more interesting rejected sandwich ideas.
The first rejected sandwich idea was 'the Wizard' by Ray Whitney. Apparently, it consisted of a little mayo, a little mustard, a little lettuce and a lot of ham served on short bread.
The next was a creation submitted by Jim Rutherford. It was called the "Craig Adams". According to the taste testers, it was not a great hoagie, just a mediocre grinder. What made this sandwich notable was that Harris Teeter wasn't going to charge anything for it. They were just going to give it away for "future considerations".

An anonymous submission was also recieved and rejected. It was called the "Johnny Grahame". Apparently, the recipe was a bottle of Tequila sandwiched between two Hooters girls. Sure, that submission may not be in line with Harris Teeter's target marketing image, but I've got to admit, I'd stand in line for that one every day at lunch.
There was also a submission by Cam Ward, called the "Glove Side High". It was rejected because the only ingredient was Swiss Cheese.
Then, there was the "Frank Kaberle". It was a toasted sub. It apparently had a lot of potential, but they eventually scrapped it because no matter how much they tried to get it right, it just kept getting burnt.
And finally, there was quite a buzz surrounding Rod Brind'amour's entry. It was called "The Ex Wife". But it didn't get very far. Not only was it bitter, but you had to pay for the sandwich while someone else got to eat it.

So there you have it: the rejected Hurricane Sandwiches of 08/09. During our research, we also found out that this promotion also takes place elsewhere in the NHL, and we managed to get a list of rejected sandwich ideas from other teams around the league. But that is a post for another day.