Little Something To Cheer Up Caniac Nation

We could all use it today.

If you don't know what the BBC line is, I'll let you figure it out.

The Pirates Are Ready 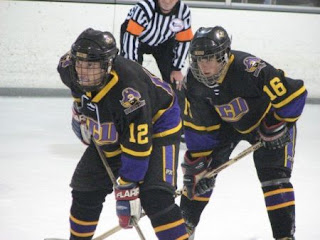 This will open the door for Eastern NC competitive hockey.

Overall record in 2 seasons of existence:

Go get 'em Pirates and Congrats!

Report From Practice: Not A Smile In The Crowd 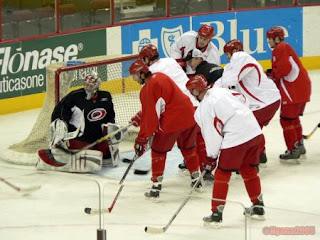 Very somber on and off the ice today at the RecZone. Even the hyper kids who are usually running around screaming at the players for an autograph seemed sedated today.

Lavi and Coach Mac spent a good amount of time with Staal, Willy, Whit, Cole and Seidenberg doing 3 on 2's with Grahame in net. Crackers looked sharp, everyone else just seemed pissed off.

Brindy, Ladd, Carter were taking shots at the top of the net @ an empty goal.

Then Coach pulled them into the locker rooms for a closed-door team meeting.

They know what they have to do. All hope is not lost, stranger things have happened.

But they'll need a little help from the hockey gods...

Who's Ready To Tee Off ?

With their chance to defend Lord Stanley on the line and five games left before the playoffs start; apparently the boys are.


This is where the ECU Pirate in me says "AARRRRRGHHH" in frustration.


Oh well, at least Mike Commodore will be able to show up at everyone's Cup party this summer.

Have You Seen Any of These Guys?

The Leafs Are Falling

It's got to be tough as a Toronto Maple Leaf fan. That sympathy won't last past 7:30 tonight for Caniac Nation. With MTL, NYI, and Carolina all competing for the final playoff spot, the Leafs once again are on the outside looking in. Our canes are rocking right now, and Cason's skepticism department is losing steam with each game played.

Let's hope Coach Mo, Jeff O'Neill, and Lucky B don't have that '02 come from behind magic in them anymore.

Yes, that's the most recent of their championships.

So my Winter Hockey Rec League will have to wait until next year.

I guess I shouldn't have held my breath that a deep freeze would happen in Raleigh this season.

Living on Lake Johnson, we still are holding out for next winter's subzero NC temperatures to arrive for at least a week. When and if it happens, I'm buying 10 pairs of skates, 10 sticks, and at least one puck.

For now, we'll just have to be content with beautiful, 80 degree weather in March!

It's about Dern Tootin' Time

March 23, 2007, and finally there's a SERIOUS youth hockey league around Raleigh now! Like Forslund says, you can pretty much count on someone from the Carolinas being drafted somewhere decent before the end of 2010, and start expecting it a lot more regularly (we hope) when all our lil' tots grow up!

SIGN YOUR KIDS UP (it's a Adobe Acrobat .Pdf file)

At a TD Club meeting many years before his death, Coach Paul "Bear"
Bryant told the following story, which was typical of the way he operated:

I had just been named the new head coach at Alabama and was off in my
old car down in South Alabama, recruiting a prospect who was supposed to
have been a pretty good player and I was havin' trouble finding the place.
Getting hungry I spied an old cinder block building with a small sign
out front that simply said "Restaurant."

I pull up, go in and every head in the place turns to stare at me. Seems
I'm the only white 'fella' in the place. But the food smelled good so I
skip a table and go up to a cement bar and sit. A big ole man in a tee
shirt and cap comes over and says, "What do you need?" I told him I
needed lunch and what did they have today?

He says, "You probably won't like it here, today we're having chitlins,
collared greens and black eyed peas with cornbread. I'll bet you don't
even know what chitlins are, do you?" I looked him square in the eye and
said, "I'm from Arkansas , I've probably eaten a mile of them. Sounds like I'm
in the right place." They all smiled as he left to serve me up a big plate.

When he comes back he says, "You ain't from around here then?" And I
explain I'm the new football coach up in Tuscaloosa at the University
and I'm here to find whatever that boy's name was and he says, yeah I've
heard of him, he's supposed to be pretty good. And he gives me directions to
the school so I can meet him and his coach.

As I'm paying up to leave, I remember my manners and leave a tip, not
too big to be flashy, but a good one and he told me lunch was on him, but I
told him for a lunch that good, I felt I should pay. The big man asked
me if I had a photograph or something he could hang up to show I'd been
there.

I was so new that I didn't have any yet. It really wasn't that big a
thing back then to be asked for, but I took a napkin and wrote his name and
address on it and told him I'd get him one. I met the kid I was 'lookin'
for later that afternoon and I don't remember his name, but do remember
I didn't think much of him when I met him I had wasted a day, or so I
thought.

When I got back to Tuscaloosa late that night, I took that napkin from
my shirt pocket and put it under my keys so I wouldn't forget it. Heck,
back then I was excited that anybody would want a picture of me. And the next
day we found a picture and I wrote on it, "Thanks for the best lunch
I've ever had, Paul Bear Bryant."

Now let's go a whole 'buncha' years down the road. Now we have black
players at Alabama and I'm back down in that part of the country
scouting an offensive lineman we sure needed. Y'all remember, (and I forget the
name, but it's not important to the story), well anyway, he's got two
friends going to Auburn and he tells me he's got his heart set on Auburn
too, so I leave empty handed and go on see some others while I'm down
there.

Two days later, I'm in my office in Tuscaloosa and the phone rings and
it's this kid who just turned me down, and he says, "Coach, do you still want
me at Alabama ?" And I said, "Yes I sure do." And he says, O.K. he'll come.
And I say, "Well son, what changed your mind?" And he said, "When my
grandpa found out that I had a chance to play for you and said no, he
pitched a fit and told me I wasn't going nowhere but Alabama , and
wasn't playing for nobody but you. He thinks a lot of you and has ever since
y'all met."

Well, I didn't know his granddad from Adam's housecat so I asked him who
his granddaddy was and he said, "You probly don't remember him, but you
ate in his restaurant your first year at Alabama and you sent him a picture
that he's had hung in that place ever since. That picture's his pride
and
joy and he still tells everybody about the day that Bear Bryant came in
and had chitlins with him. My grandpa said that when you left there, he
never expected you to remember him or to send him that picture, but you kept
your word to him and to Grandpa, that's everything. He said you could teach
me more than football and I had to play for a man like you, so I guess I'm
going to."

I was floored. But I learned that the lessons my mama taught me were
always right. It don't cost nuthin' to be nice. It don't cost 'nuthin' to do
the right thing most of the time, and it costs a lot to lose your good name
by breakin' your word to someone.

When I went back to sign that boy, I looked up his Grandpa and he's
still running that place, but it looks a lot better now; and he didn't have
chitlins that day, but he had some ribs that woulda' made Dreamland
proud and I made sure I posed for a lot of pictures; and don't think I didn't
leave some new ones for him, too, along with a signed football.

I made it clear to all my assistants to keep this story and these
lessons in mind when they're out on the road. And if you remember anything else
from me, remember this - It really doesn't cost anything to be nice, and
the rewards can be unimaginable. "

Coach Bryant was in the presence of these few gentlemen for only
minutes, and he defined himself for life, to these gentlemen, as a nice man.
Regardless of our profession, we do define ourselves by how we treat
others, and how we behave in the presence of others, and most of the
time, we have only minutes or seconds to leave a lasting impression - we can
be rude, crude, arrogant, cantankerous, or we can be nice. Nice is always a
better choice.

Sorry for the L.O.P. lately, but I'm still technically under construction!

Jumping right back into it....

After a 7-2 scha-lacking of Brodeur and the Devils last Saturday, the boys are well rested and (hopefully) prepared for the Crapitals tonight at the RBC Center. Washington is playing the role of spoiler with only 9 games left in the regular season. As one of the only Eastern Conference teams already out of playoff contention, they are not to be overlooked, always showing up to play against us and their other SE Division rivals.

So far this season:

Olie the goalie is back from injury, and will (more than likely) be sharp tonight. Will we see Cam Ward return tonight? John Grahame has played like he deserves the start, however being this close to the playoffs - don't be suprised if Ward-O is in net.

Chad LaRose's performance in NJ hopefully will ignite the rest of the teams inspiration to finish the season strong and at least play well heading into postseason play.

Alexander Semin is the one Crapital to watch for, he always burns us!

ps - I will be there - let's hope I'm not again the home game bad-luck charm!

After leading the conference this season (Blue Ridge Hockey Conference) with a scorching overall record of 14 wins and 1 loss, the ECU Pirates fell in the semi-final round of the championship tournament to Appalachian State, 5-2.

In only their 2nd year of existence, the Pirates continued to dominate play in Greenville and on the road. Last season, they made it all the way to the championship game only to lose to defending champ University of Richmond.

Led by the standout play of goalie & team president Brent Falcon & defenseman Dan Duda, ECU continues to put hockey on the map in Eastern NC. In the coming weeks, look for a full-length feature on the Pirates hockey team from a special guest writer!

Plop Plop, Fizz Fizz. Oh, What a Relief It Is Hurricanes players and fans alike are in need of fixing our ailing stomach pains. Knowing that the team has what it takes to AT LEAST make the playoffs, if not enter them as a 4 or 5 seed, is making us all a bit nauseous. Every team has issues, whether it be injuries or personnel - so there is no excuse as to why the level of play is where it is.

Heres hoping that a day off and a team other than the Ottawa Senators coming to play will rejuvenate a struggling 'Canes team.