The Staal Brothers & Team Canada Get Their Party On In Russia

(AP / Dmitry Lovetsky)
The Staal Family "hype" is proving has proved to be the real deal. Oldest at 22 years of age. 3rd oldest at 18. House trophy case (since being Pro): Lord Stanley & World Champions. Not too shabby.

The Clan-Destine stands tall in this great picture on home turf in Thunder Bay. What do they feed them? What is in their water? We here at COI have reports that they eat lightning and crap thunder. 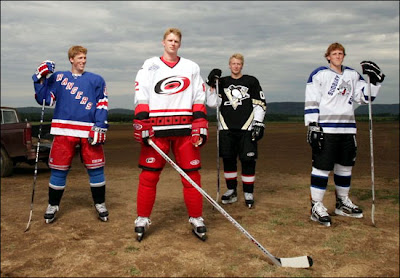 Hey Eric. Don't feel too bad when your youngest brother, Jared, is plastering you into the boards while you attempt a breakaway. (speaking in future-tongue)

Throw a party for him when the kid gets his draft day signing bonus in a year or two.

Might we see Marc Staal in a blue shirt next season?