Just What Am I Paying For? 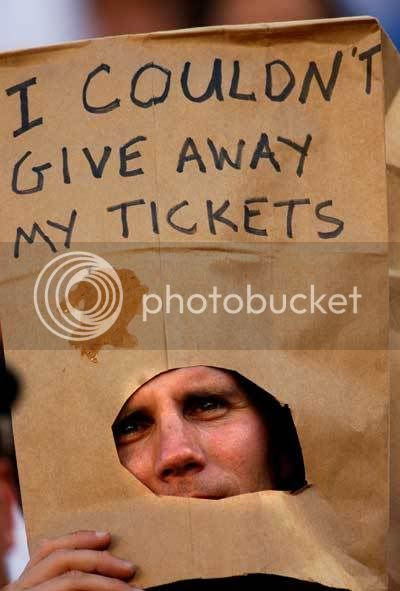 There are many other things I could be doing right now. In fact, I should probably be in bed getting some rest right now. But I have to get this out of my system. What am I paying for this season?
My frustration is not with losing. I can handle that. In fact, the vast majority of the Canes fanbase can handle that. What I can't handle is watching games where it is readily apparent that the team isn't even making a serious effort.
I have never felt entitled to wins. Rather, I feel that I pay my money for a few hours of entertainment. And I've gotten my money's worth watching quite a few entertaining losses. But I can't help but feel cheated when I pay money just to watch a team not even bother to show up. And that's what I have seen a bit too often lately out of my beloved Canes.
I'm not gonna call for a trade. I'm not gonna call for a firing. In fact, I know that there is little to nothing I can do as a fan that is going to make a bit of difference in how the team is playing (or rather not playing) right now. But I can and will vent my spleen a bit. It's my one and only right as a fan. It's the one personal right and privilege to which paying my ticket money entitles me.
Now I don't pretend to know what it is like to play in the NHL. Or in any other major professional sports league for that matter. So maybe it is a bit arrogant of me to bitch or complain about athletes who do. But I'm gonna say this: There is no excuse whatsoever for a professional athlete to "take the night off" or "mail it in". None. As a paying fan, I deserve nothing less than total effort. THAT is what I pay for. Not wins. Not goals. Not saves. Not highlight reel plays. I simply pay for effort.
The players on any sports team are the champions of their fans. These fans shell out thousands of dollars to their favorite teams in an effort to vicariously live out their personally unattainable fantasies of battle, victory, fame and glory. As a consequence, athletes are paid HUGE (relative to their fans) salaries to be our surrogate egos for a few hours on the field of battle. As fans, we allow ourselves to emotionally connect and "identify" with players that we will probably never even meet, in order to escape for a fleeting moment, from the everyday stresses and strains of our lives. And in return for that investment, we may not be entitled to a "win", but I do believe we are entitled to effort. If the players do not want to play for themselves or their own pride, then they should still play for their fans (and their vicarious pride) nonetheless...
All we ask as fans is that our players give us an honest effort. All we ask is that our heroes play the game with the same amount of heart that we believe we would bring, were we lucky enough to pull that jersey over our head and step out onto that ice. They say that some of our older players still talk reverently about the 5 minute standing ovation the Canes received as they were getting bounced from the playoffs in that final game in 2001. And in that long past ovation, the nature of the true Canes fan was revealed. The true Canes fan does not cheer solely for a specific result. He/she cheers for the effort that the players expend on our behalf. We cheer for our love of the game.
So were I able to address the Hurricanes, I would say this: We were called the "Loudest House in the NHL" long before this team ever won that big old cup. And that particular title could only have been bought and paid for through the hearts of great players; and not by all the silver in Lord Stanley's cup. Now, that house is beginning to fall silent. Don't let the echoes die. Just give us a sign and we'll raise that roof like only we can. The only thing we are waiting on is you...