Canes Get A Jedi & My Niece Is Walking

The Philadelphia Flyers & New York Rangers made the two biggest splashes today in the free agency pool. NYR snagged up both Drury & Scotty Gomez while the Flyers added Daniel Briere to an already bolstered lineup featuring recently acquired Kimmo Timonen & Scottie Hartnell. I'd hate to see what the average salary rate is now after the day's hefty checkbooks have been busted out. Inflation is a bitch!

Carolina announced the signing of the very affordable winger Jeff Hamilton with a 2-year deal at $800K per. Sure, you may have never heard of him before today either:

But if he can win shootouts in a Canes jersey:

He's already worth his weight to me seeing as the boys laid the goose egg last season in shootout wins. It's exciting in any measure to have new blood around here. Jeff Hamilton is a fresh face that will hopefully ignite the team and make the contributions that a Trevor Letowski could not quite accomplish last season.

Upon first looking at Jeff and his head gear, all I could immediately think of was The Empire Strikes Back: 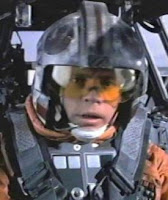 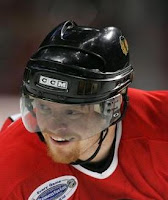 In your too cute moment of the week, reports from SC are that my niece is now taking her first steps. She'll be ready for skates in no time. 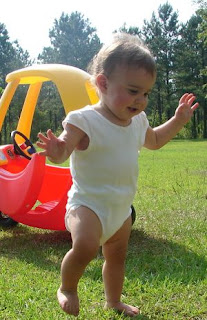