The Comeback Kings are back: Canes with weekend sweep

The Hurricanes displayed some serious heart and effort in both the opening night 6-4 win over the Panthers and again Saturday night at Tampa with a 4-3 OT decision. What a wild, 24 hour ride for the Caniacs!

The opening entrance was pretty cool. I feel sorry for anyone who sat in the lower bowl (Lexus Club side) that had their view obstructed by the impromptu hanging TV screen during all that. The leftover fog seemed to linger around the ice for half of the first period.

Florida came out prepared and walked through an almost non-existent Carolina D to score a few beauties. The Cats made true on their power play chances and Stiller's tip-in goal had the good guys down 2-0 early on. (Methinks Cory Stillman will have a great season with Florida based off Friday's observations and the lack of talent surrounding him.)

After that however, the Canes put on their shit-kickers and started generating pressure by maintaining the offensive zone. Tim Gleason borrowed Wallin's nickname of "The Secret Weapon" and railed out three assists in the game. Pitkanen looked great and scored, as well as Brindy. LaCouture and B-Sutter were workhorses and their efforts paid off as Danny had the game-winner on a feed from Brandon.

Sutter will score at least 3-4 shorties this year - bank it.

In a quip borrowed from the fine folks at The Battle of California, here's your entrusted blogger enjoying the action last night: 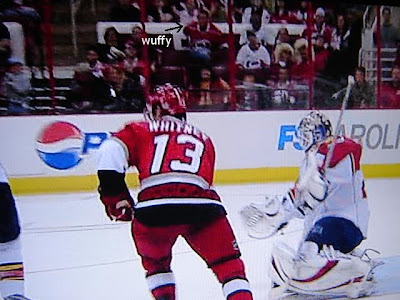 Those aren't my usual section 102 seats, but they surely didn't suck. A big thanks and shout-out to reader Bill who provided Wuffy with an adult beverage during the 1st intermission.

On to Saturday's game.

I got home in time to start watching the Tampa game at the beginning of the 2nd period. As I saw the Canes slack around the ice, the Bolts appeared to be taking advantage of a weary Carolina squad. But lo and behold, they crept back into it by waking up and forcing Tampa goalie Mike Smith to do his drama queen act. aside:To Smith's credit, he is a great goaltender that can flat-out play with a suspect defense in front of him. But when he lets in a goal or disagrees with a call, he's more dramatic than the ladies from Desperate Housewives. Exhibit A being the shattering of his stick over the crossbar tonight.

The third period saw Carolina completely dominate play and Tampa in fact looked like the team with tired legs.

In fact, the Canes ate up the Tampa defense, spit them out, swallowed them again and then crapped them out. Outstanding play to come back from being down 3-0 and finish them off with a beautiful Whitney-to-Staal two on one OT marker.

To borrow a line from the boys of The Pensblog: 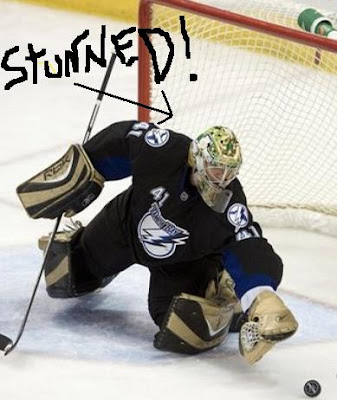