Colin Powell would be proud...

... to be there seeing stellar puck handling skills during today's Isles / Canes game. Let's just hope he was watching Ricky D do his thing and not Cam Ward.

When the team hired Tom Barrasso as the new goalie coach, Cam's first response was, "One of his top skills was puck-handling, and if you look at my game, that's one of the areas I'd like to improve on". A collective 'hallelujah' was said, but we're pretty sure that he didn't teach Ward this one: 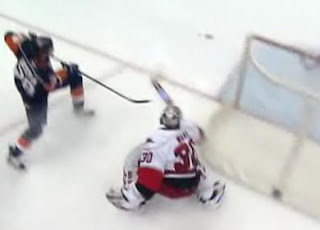 Luckily for the team, he looked sharp in a back-and-forth gritty victory over NY in betwixt the pipes.

Brindy must have taken AQ's post personally, as he has woken up with 6 points in his last three games.

Cory Stillman was in the right place at the right time and scored the OT chip-in on the rebound as he was knocked down onto his back. Fortunately, he was able to get his skate out from under him thus avoiding a scary incident like the "hey-your-knee-isn't-supposed-to-bend-like-that" fall at Philadelphia in December. 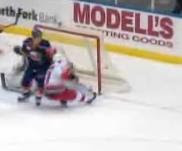