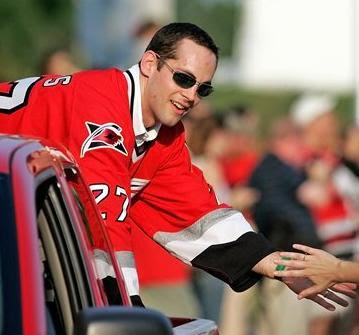 It wasn't working out with Craig Adams anymore as he became the first of several moves promised to happen. The Chicago Blackhawks traded with the Canes today for "future considerations". So, what number would you like to wear, Future? Go and tell the seamstress how to spell that 2nd word correctly and you're in the lineup tonight.
Being the 3rd longest tenured Hurricane, you can't help but look back on the good things he did with the team.
The highlight for moi?
December 6, 2005
Kevyn Adams scores a natty hat trick, which at the time was shocking enough. Craig gets the primary helper on all three goals in a 6-2 rout of the Anaheim Ducks. When "The Adams Family" line can do that kind of damage - a team is hitting on all cylinders.
His energy will be missed, but reuniting the Adams family in Chicago might be great for the both of their respective careers. So long, farewell, auf wiedersehen, goodbye.