Thick skin or not, your opportunity is there as a Carolina Hurricane 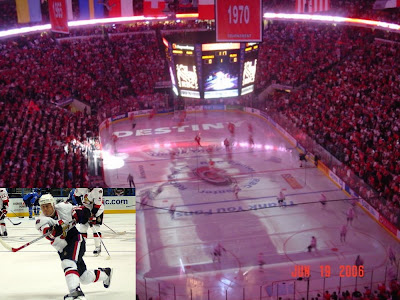 As Cane newbie Joe Corvo came in this week from the Senators, much was made about his departure and the defenseman not being able to "take the pressure" in a Canadian NHL market.
Senators GM Bryan Murray:
“I don’t know whether it was the pressure or never having a life away from the building, but he felt that Joe would enjoy going to an American team,” Murray told the Ottawa Sun. “He wanted to play where there was less scrutiny. He just couldn’t handle the pressure here."
So be it. An unwanted player left a team for a patch of greener grass in Raleigh, not to mention from the sub-zero tundra to the 60 degree February days of NC. Who knows how Joe "Uh Oh" Corvo may end up playing with the Canes. Although he may not be the savior to Carolina's defensive woes, chances are he will flourish in Coach Lavi's system.
The soul searching and confidence boost that comes with joining a new team may be all an athlete needs to jump start his game.
Exhibit A. Look at Mark Recchi (sans his manboobs), who left his long time home in Pittsburgh this year to the (at the time) lowly Atlanta Thrashers. Be it spite or having the drive - guys like him can benefit from being out of the limelight in major hockey towns. 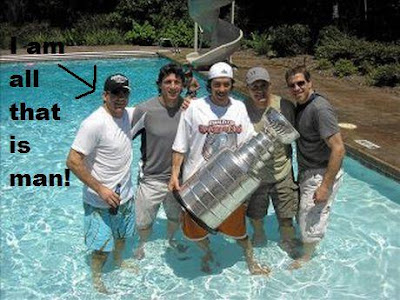 Exhibit B. - Mr. Sergei Samsonov. People can remember when he was "the next big thing" as a Boston Bruin. A former rookie of the year, he struggled mightily in Montreal, had a stint in Edmonton and signed a lucrative deal with Chicago. He had constantly been turning the puck over this season with the Hawks and had a whopping 4 points until he was claimed off waivers by Jimmy Boy and the Canes. Now? He's been consistently one of Carolina's best players using his nifty puck handling skills to chip in offensively at almost a point a night average. 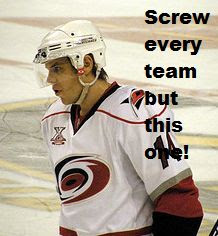 So I say let them talk all the trash they want to about Big Joe Corvo and whether or not he could "handle" things up there. While they chase their players away, just remember there will always be a place down South for them to flourish, thick skinned or not.