Heeding the advice of CasonBlog, Joe Corvo has quicky relinquished the "gay viking raider" look in favor of a more conservative, less flashy do. 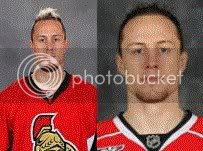 He's been nothing short of spectacular here in his dozen or so games with the Canes. Granted, the entire team has been firing on all cylinders but Joe has certainly lived up to the potential. It has been well documented that Stiller & Commie are not fulfilling their end of the trade with a floundering Ottawa club. There have been very few signs of the Joe "Uh-Oh" Corvo that our Sens friends warned us about. He's been defensively sound and responsible playing the point on a potent power play unit.

All reports on Joe say that he is shy and soft-spoken. He's been letting his play speak for him. That's good, as we wouldn't want him cracking under the pressure of a bush league coach or media, would we?