Rosey's back & them young'ns are in town 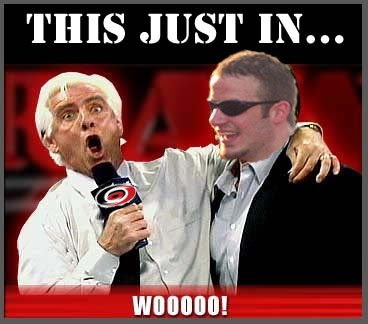 I knew it would only be a matter of time before Mr. LaRose re-signed with the Canes. I've seen this said many places over the past week and a 1/2 and couldn't agree more: Yes Erik Cole had to go and he was a fan favorite. But losing Chad AND Erik in the same month wouldn't go over too well with the already disgruntled fanbase.
I made it out to the Hurricanes prospect on-ice portion yesterday at the RecZone. Sure, it was neat seeing all the prospects sweating bullets, huffing & puffing. What I got the most kick out of was seeing Glen Wesley out there guiding the defensemen along with Ronnie Francis at the other end.
Luke thinks that Brandon Sutter was "big, smooth & polished". I'd say he was more "big, clunky & goofy". It is obvious that this kid has the hockey sense in him, but he still needs to grow into that big body of his. Maybe it was the ass-kicking that trainer Pete Friesen gave the boys before the skate that made him look that way to me.
Zach Boychuk looked really sharp. He's fast as hell and was making some wickedly good shots on goal. Michael Leighton appeared sharp as I've ever seen him, making several dazzling saves during the shooting drills.