We've got ourselves a Dirty South Three Way

Washington is certainly the only team playing like they want the lead within the past few weeks. They've been consistent, something that Atlanta and Carolina can not seem to do.

Here-in lies the problem though. If you look ahead to the end of the season, the Caps and Canes both have 3 games in April. They play each other on the 1st in DC. After that, the Canes will play the TB Lightning the next day and Florida as the final game on the 4th. The Caps get to play the Bolts on April 3rd and the Panthers on the 5th, with both clubs having tired legs to defend against the lethal AO.

So the NHL scheduling crew is at it once again with their brilliance. Carolina controls their own fate however and all they can do is win-and-yr-in.

A great way to head into the stretch run would be tonight against a Pittsburgh team that played last night in a 3-1 loss to Boston. Although Geno Malkin is shredding nets without Ol Juicy Lips & co, the Canes have proved they can hold their own against this team, Sidney on ice or not. Overshadowed by the media love affair with Malkin is Eric's brother Jordan Staal who has also picked up his play of late. Should be fun!

Happy Valentines Day all you love birds out there! Smooches! 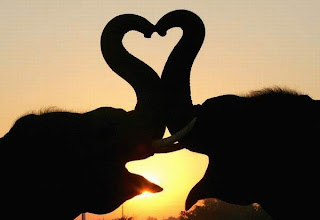 "You wouldn't propose to me at a hockey game ... would you?"