Change in Atmosphere: Volume not Valium 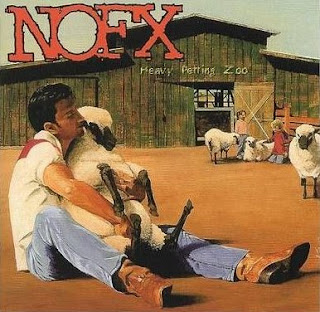 I know what you're thinking. What does a man cuddling with a sheep have to do with hockey? Why, nothing of course. So what gives?

I'll tell ya: It ain't about the lovely cover art, it's about the auditory ambrosia within. That's right. It's about the music. And that, my friends is the bridge to hockey. Allow me to explain.

I am friggin sick of the pansy crap blaring out of the jumbotron during games. Seriously. If I never hear Gary Glitter "Rock and Roll part 2" again, it'll be too soon. Sure, it was a great sports "anthem" circa 1981. And god knows, I love the 80's (and yes, I do know that awful song is from the early 70's). But let's face reality: Ole Gary is a convicted pedophile. So couple that fact with the prepubescent kids now featured on the Canes season ticket stubs and ask yourself what message are they really sending? And while we're at it, let's shelve "We Will Rock You" for the time being. At least until they've reached the consistency level where there's a better than 50% chance on any given night that the Canes will, in fact, rock somebody. I swear one night, the Canes were down 3 goals with 2 minutes to play, and those RBC idiots started playing "We Will Rock You". We lost by 4. Talk about writing checks your bodies can't cash...

And why the hell to we have to hear the [edited by Billy Graham]-ing "Chicken Dance" every game? Isn't that a yankee wedding song? Note to RBC staff: IT"S A [ edited by the Vatican]- ING HOCKEY GAME!!! NOT A [personally edited by the pope himself] - ING YANKEE WEDDING OR MILWAUKEE BAR MITZVAH!!!

And I won't even begin to describe everything that is wrong with playing "Cotton-Eye Joe". It makes me nauseous just thinking about it. Suffice it to say, and I mean this in the strictest biblical sense: THAT SONG SUCKS [edited by the Moral Majority; minus Falwell]!!!

So what do I propose? Simple. Replace the god awful sappy/kiddy/antique/NAMBLA approved music with something original. Something edgy. Something fast. Something violent.

In two words: Something punk.

Punk makes everything better. More energetic. More passionate. More lively. More alive! Can you imagine the jolt of confusion and fear opposing teams would get as they came out of the tunnel to the sound of Rancid's "Killing Zone" and the awe-inducing sight of 18,000 manic Caniacs in a full blown panoramic pogo? I can. It'd be both a beautiful and terrible sight to behold. I can personally attest to the fact that a man can derive ambient energy from groups like D.R.I., NOFX, X, Black Flag, or most anything early with Henry Rollins...

True story: Once upon a time, back when ole East was but a young lad, I instigated a full blown riot in a previously subdued establishment, merely by bribing a sympathetic DJ into substituting one of my Dead Kennedy's LP's (In God We Trust, Inc. - on vinyl...) for the pre-existing dreck the bar had been feeding the assorted patronage. The last thing I clearly remember before coming to about 6 hours later (in a strange bed with a very cute green and pink haired girl who introduced herself as "Lash") was seeing the entire joint in a violent counter-clockwise mosh with both bartenders in the middle of the vortex; slinging elbows and grinning like they'd won the 'effing' lottery. Best I can reconstruct, I caught either an elbow or knee to the face (dunno which, I never saw it coming. Or going for that matter...) shortly thereafter, and was dragged off to lie in state on the end of the bar, until closing time, when my mortal remains were mercifully claimed by "Lash" and carried to her pad for suitable disposition. THIS is what punk brings to the table.
Punk can do anything. Punk can even turn bad 80's pop into something good (that's a Utah Saints [sub: Kate Bush] reference, to any fellow sophisticates). Don't believe me? Check it:

And that's the rub. If you want a loud, active crowd, you've got to give them motivation. And upgrading the auditory atmosphere in the RBC from the same old tired and predictable garbage would go a long way towards that. Let's face it, hockey is a fast, reckless, extreme, and even a little violent sport. So let's get with the program, and frame this incredible sport with some fast, reckless, extreme, and even a little violent music. A hockey game is not a Bar Mitzvah. Logically, it therefore shouldn't sound like one. They need to can the milquetoast music, and set the place afire. They just need a spark.