Charlotte Shootout in Pineville This Weekend

By App Hockey Press CHARLOTTE -- Southern hockey has seen it's fair share of
advancements in recent years, and when the number 3 Georgia Tech, 7 East
Carolina, 9 George Washington and 11 App State meet this weekend in the first
ever "Charlotte Shootout", our region will see one more. The
tournament is designed to bring teams from the southern region that
traditionally do not play each other together for one exciting weekend of
hockey. Teams will have merchandise available to purchase for
the fans and ticket prices are $10 for an all weekend pass to the 6 games to be
played. App State will have order forms for jersey's on hand,
they take approximately 3 weeks to have made and shipped. The
only team App State has played coming into the tournament is former BRHC
opponent East Carolina, who in the past two seasons App has a 1-3-1 record
against. The last being a 5-2 win in the BRHC conference
semifinals. The teams are hoping that the initial success of
the tournament will allow them to expand it to other teams in the future to
further the exposure of college hockey to hockey fans in the south who's options
are limited. The Schedule is as follows:
Fri, Oct 55:30 –
7:30pm#3 Georgia Tech vs. #11 Appalachian St10:15pm – 12:15am#8 East Carolina
vs. #9 George Washington
Sat, Oct 65:45 - 7:45pmGT vs. GW10:15pm – 12:15amApp
St vs. ECU
Sun, Oct 78:30 – 10:30amApp St vs GW10:45am – 12:45pmGT vs.
ECU

Watch out for the ECU vs. App match-up - this has become one heated rivalry over the years - with ASU knocking the highly favored Pirates out of the BRHC Tournament last year. 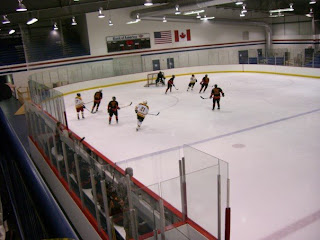